On hit-Tuner.net you can listen to radio music from Antigua. At this point you can learn more about the country: Antigua and Barbuda is a twin-island nation lying between the Caribbean Sea and the Atlantic Ocean. It consists of two major inhabited islands, Antigua and Barbuda, and a number of smaller islands. Separated by a few nautical miles, Antigua and Barbuda are in the middle of the Leeward Islands, part of the Lesser Antilles. The country is nicknamed "Land of 365 Beaches" due to the many beaches surrounding the islands. 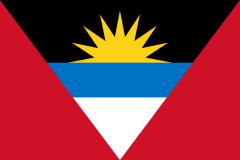