On hit-Tuner.net you can listen to radio music from Kyrgyzstan. At this point you can learn more about the country: Kyrgyzstan, officially the Kyrgyz Republic, formerly known as Kirghizia, is a country in Central Asia. Landlocked and mountainous, Kyrgyzstan is bordered by Kazakhstan to the north, Uzbekistan to the west and southwest, Tajikistan to the southwest and China to the east. Its capital and largest city is Bishkek.

The language is Kyrgyz. The capital of Kyrgyzstan is Bishkek. The country has an area of ? (for comparison: United Kingdom 315.093 km˛). In Kyrgyzstan there is a population of ? and ? only in Bishkek. The currency is ? ... 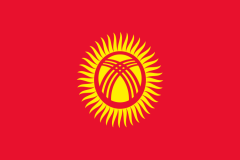