On hit-Tuner.net you can listen to radio music from Turkey. At this point you can learn more about the country: Turkey is a contiguous transcontinental parliamentary republic, with its smaller part in Southeastern Europe and its larger part in Western Asia. Turkey is bordered by eight countries: Bulgaria to the northwest; Greece to the west; Georgia to the northeast; Armenia, Iran and the Azerbaijani exclave of Nakhchivan to the east; and Iraq and Syria to the southeast. The Mediterranean Sea is to the south; the Aegean Sea to the west; and the Black Sea to the north. The Sea of Marmara, the Bosphorus and the Dardanelles demarcate the boundary between Thrace and Anatolia; they also separate Europe and Asia. Turkey's location at the crossroads of Europe and Asia makes it a country of significant geostrategic importance.

Percentage of public debt: 42.4% of GDP (2011 est.) 43% of GDP (2010 est.) note: data cover central government debt, and excludes debt instruments issued (or owned) by government entities other than the treasury -the data include treasury debt held by foreign entities -the data excl 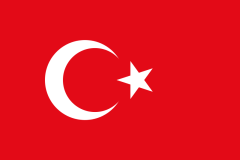