Albanian music is a mixture of Arab style music, because of the nation having been controlled by the Ottoman Empire for centuries, and the styles of southeastern Europe. The description fits both the folk music and the pop music. The blend is a unique style of music that the words are just an addition to.

The folk Albanian music is divided between the epic poetry of the Ghegs and the iso-polyphony of the Tosk. The Ghegs of the north use their music to express their moral code and oral history. The Tosks of the south have more of an ensemble style music that can be somewhat melancholy.

Pop Albanian music has strong mixtures of Arab styles and poppy European singing. The music industry had to rebuild itself after the Kosovo War and it has succeeded. Now, some of the more popular artists have views for videos that are three or four times the supposed amount of Albanian language speakers.

Albanian music has a classical side. The music has many Albanian instruments to choose from. Their operas are fairly new, as the first Albanian opera was penned in 1915. The singers have been popular, with Inva Mula being picked for the Diva Plavalaguna role in The Fifth Element.

Check out our online radio portal hit-Tuner.net to your favorite Albanian music, artists past and present. Available on this website you'll find thousands of internetradio stations - and all for free! 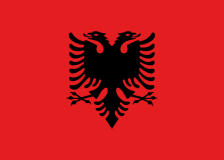