Traditional Korean music uses more then sixty traditional instruments snd several music forms to bring out the heart and soul of the history of this nation. The listener is taken in by its rhythms and rich melodies. There are several styles, folk, vocal, religious and ritual music.

First the classical (chong'ak) music of the upper classes: Chamber music with gentle wistful tempos. On the other hand there is the folk (minsok'ak) music of the common classes: It represents the emotions and spontaneity of the people.

Folk music (called pansori) is very lively with simple rhythms and energetic melodies. It may be in many different forms depending on the traditional Korean village it came from. It is unique blend of storytelling and music accompanied bya single drum.

Modern Korean Music of today has been influenced by the West. There are many genres,Pop, Rock, Hip-Hop, Contemporary Pop, R&B, Reggae and the wildly popular K-Pop to name a few. K-Pop is being listen to by the young world wide. One of the oldest forms of Korean music is Trot (teuroteu), songs sung with very distingtive rhythms. It has been recorded by new artists and is once again regaining popularity.

To listen to your favorite Korean music or to experience a new form just click at our radio portal on hit-Tuner.net and make your genre selection. 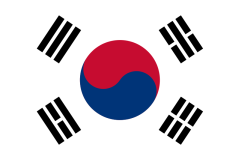